tonyhax with a game exploit

The original, well-tested method, which leverages an exploit in supported games to launch tonyhax.

This method requires copying to the memory card:

These have been tested to work on real hardware:

This video from MrMario2011 explains pretty well how to install it using uLaunchELF on a memory card:

After about three seconds tonyhax should be running.

The exploit should then run.

After a couple seconds, tonyhax should boot.

During the exploit launch, since v1.1.2 the screen will flash with different colors depending on which phase it is:

The console should spend no more than a couple seconds with each color. If it spends more time (specially with the green screen), it’s probably crashed. Please report it.

How does this work?

In layman terms, this exploit uses an oversight from the programmers: the game does not check that text in the save file hasn’t been tampered and fits in the space the program allocated for it. If we externally change that text to something longer, we can overwrite other vital parts of the system’s memory and run our own code.

THPSx save games have been modified to have the following two separate parts:

When entering the skater customization menu, the menu is dinamically generated to include the saved skater names in a way like:

Essentially, if a string that’s too long to overflow the buffer is specified, the buffer overflows and overwrites part of the stack as we want to, but then it gets hammered with periods.

However, as trim_string is a a subcall and has a local buffer, if we specify a character name with the right length (165 characters, exactly), the null terminator in the trimmed buffer overlaps the first character of menutext, resulting in a menu entry with length of 0, thus sparing the rest of the stack contents.

After some more menu-related stuff, the return address is finally pulled from the stack and the code jumps to it. This return address points to the beginning of the high scores menu, whose contents are also loaded with no checks from the memory card, and where we have the first-stage payload.

This is a super simple exploit. The program loads the entire save file contents at an static memory location, then blindly sprintfs into a stack buffer. Using a string long enough with the address of first stage loader at the correct position gets us executing our own code. 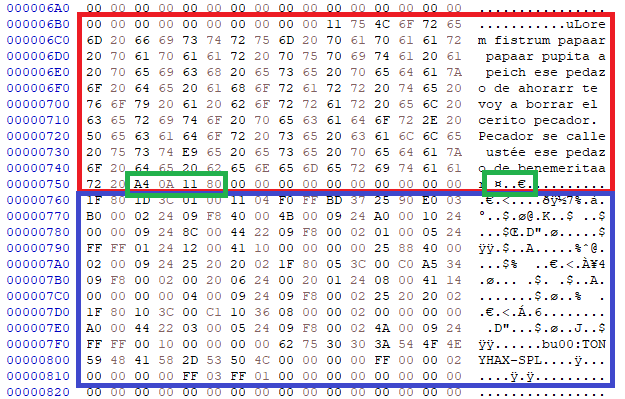 Above, the long username, with the memory location (0x80110AA4) of the first stage bootloader.

The first stage payload’s sole purpose is to load the secondary program loader (or SPL for short) from an additional save file in the memory card using the PS1 BIOS calls. Once loaded, it jumps straight to it. If for some reason it fails to load the SPL, a red screen is displayed, indicating that the exploit was successfully triggered but the it couldn’t continue.

As the console is left in an inconsistent state, the SPL then first reinitializes the system kernel (RAM, devices…), by using the very same calls the ROM executes during the booting of the console.

After that, the GPU is reset. Once the GPU is ready again, the sets up the video to a resolution of 320x240, unpacks the 1bpp font from the BIOS ROM into VRAM, and draws the basic border and program name to know everything is working fine until this point.

With a fully working screen, it then proceeds to unlocks the CD drive to accept discs missing the SCEx signature, leveraging the CD BIOS unlock commands found by Martin Korth. These unlock commands are a sort of backdoor, and the drive, probably in order to keep them secret, returns an error instead of a success message. The SPL is coded to expect a particular error to be returned, and will actually abort if the drive returns that it succeeded or if it returns another unexpected error code.

After unlocking it, it waits for the lid to be opened and closed, allowing the user to insert a new CD.

After that, the CD filesystem is reinitialized. It proceeds to read the SYSTEM.CNF configuration file, reinitializes the kernel with the parameters the game needs, and finally loads and runs the game’s main executable.

This is just a list of games that have been suggested to be checked but I’ve still not had time to look at them.

This is just a short list of games I’ve glanced over and determined they are unlikely to be exploitable: